This episode I had the pleasure of talking with Jerry Fierro. We talk about his time with Sonny Terry and how enlightening that was for himself and his now students. We also talked about what is going on with him these days in and around Naples Florida. Jerry and the band Mudbone run a jam every Tuesday night at the DogTooth sports bar 5310 Shirley St. Naples, FL 34109.

Here are some words form the Florida Weekley  PROFILES IN PARADISE

Jerry Fierro, with his harmonica and occasionally the congas, is a regular guest when the band Mudbone invites other musicians to sit in for a jam session on Tuesday evenings at Weekend Willie’s. Jerry plays great blues and is a terrific blues singer as well. It’s clear he’s having a great time when he plays. His level of excellence is not easily attained, and he’s had quite a musical journey.

He was born the ninth of 10 kids, just five minutes after his twin sister Mary, on Dec. 8, 1958, in Paterson, N.J. Although there were no musicians in the house (his dad was an accomplished auto mechanic and mom was a housewife), there was always music playing. Jerry remembers his parents having great parties with jazz standards on the record player and sometimes a live band in the yard. 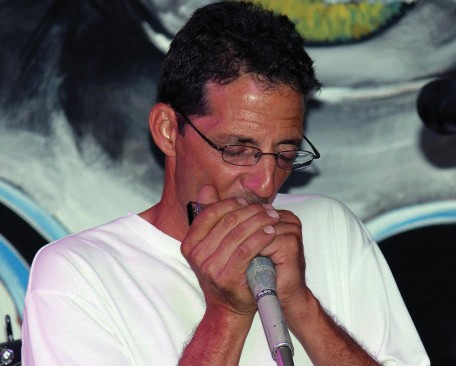 He was a senior at Passaic County Tech High School, studying to become a baker, when he got the notion to play music. Inspired by watching a cousin play the harmonica and sing, he bought his first marine band harmonica in 1975 for $5.26 at the legendary Manny’s Music in New York City. Two more really good things happened that same year, he says:

First, he was introduced to Bob “Hoochie Coochie” Paolucci, who taught him what to play and, more importantly, what not to play. “Hooch is still out there doing his thing in Long Island, New York,” he says.

And second, he met Son Lewis (Silk City Records) by answering an ad in the local music rag. “Son is a true bluesman who never made it big but should have,” he says. “He must have seen something in me, because he would sneak me into nightclubs to perform when I was 16. We’ve been playing on and off together ever since.”

After a few years playing with Mr. Lewis, Jerry got the opportunity to expand his horizons by joining Impact, a local band of brothers (now called The Flying Mueller Brothers). They played the blues and almost every other genre of music, too. For eight years, from 1978 to ’86, the band played the New York metro area. It was during that time that Jerry met blues harpist Sonny Terry. Renowned for his unique style of “hootin’ and hollerin,’” Mr. Terry gave Jerry lessons on the harmonica.

Other highlights of Jerry’s music career include playing with such greats as Junior Wells, Hubert Sumlin, Johnny Copeland, Jorma Kaukonen, Felix Cavaliere “and now the best players in Southwest Florida — Mudbone,” he says.

In 2014 Jerry won the trophy for Overall Champion in the Forida Harmonica Competition.

Check out the Mudbone Jam with Jerry and the band

I started this new page on facebook after years of establishing other pages one being the first woman admin at World of Hamronica and founding member of Harmonica Jam. Now We my husband Julio inglasses run this group of world wide harmonica LOVERS!

Visit my site for more cool linkd and blogs

To leave or reply to comments, please download free Podbean or